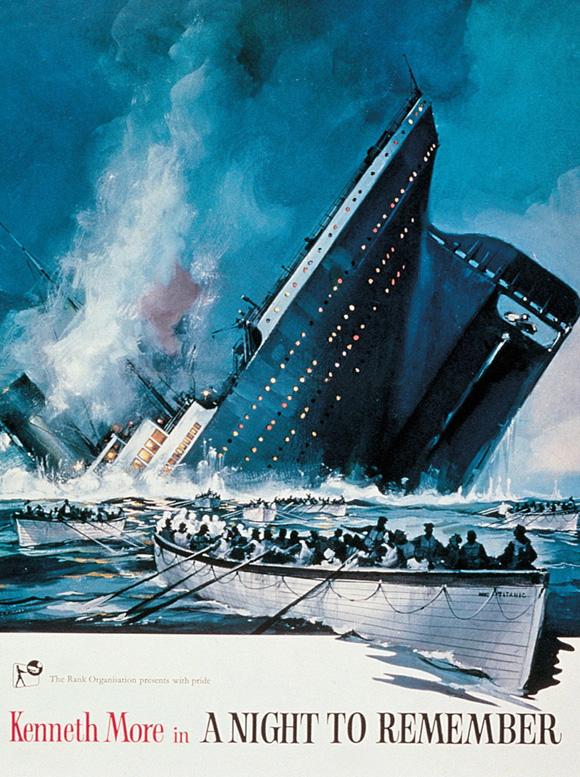 Just like the Bond films, everyone has their favourite Titanic movie, mine happens to be the 1958 film A Night to Remember, this version adapted from the Walter Loords book of the same name, telling the tale if the ill-fated maiden journey of the RMS Titanic and the people that were abroad that ‘night to remember’ and their tale from the night they never forgot.

Despite this film coming out before the discovery of the wreck, the tale was a much more truthful telling of the story, using stories from people that were on board the ship and was aimed at a much more adult audience than the 1997 romance film by James Cameron, whose appeal was a much more of a teenage market,  A Night To Remember showed a much more wide and varied range of the passengers and crew than the 1997 blockbuster, which focused to mostly to the first and third class, forgetting for the most part about the second classes, whereas in the 1958 classic, they are shown as much as the others, even the trailer for the film references all the different classes, giving a much broader range of the people on board.

Due to being filmed before the discovery of the wreckage, the only noticeable departure from the actual events of that fateful night is the sinking in one piece rather than breaking into two before going down, though this doesn’t take away from the film and still feels like it covers why the ship sank in much clearer detail, discussing the problems with bulkheads and the misguided notion that they were high enough and unlike the CGI filled 1997 homage, A Night To Remember prefers to crank up the drama and tension with beautifully crafted performances, that show the turmoil of both the Captain and ships designer, with the discovery of the design floors being one of the turning points of the film, something which was omitted from the 1997 film, which focused on showing off its CGI abilities, rather than develop the shoreline.

A Night To Remember also includes the indelible drama that comes from the other ships involved in the Titanic story, both of the other ships, the Carpathia and the Californian both play important parts of the story, showing the rush to save the people lucky enough to get a lifeboat and the mistakes made by the Californian crew, that meant the needless deaths of many many people.

The scene that will stick in your mind the longest is one that was used again in the 1997 film, its the Nearer My God To Thee scene, when the band decide to continue playing as the ship goes down, rather than trying to find themselves a lifeboat, it shows something lacking in the 1997 movie, the courage of people on board and the crew, with the singing and music, being heard from the lifeboats by the people fleeing the doomed ship, while the water starts to move further up the deck, contrasting the large range of emotions between the people lucky enough to be safe and those getting more and more desperate to live.

The other scene that you won’t forget from this film is the scene of the little boy and the old man, who find each other trying to get to safety but sadly never managed to make it to a lifeboat,  instead they are fated to  be some of the last people to go down with the ship, this was a particularly brave move, showing the deaths of two characters that in a 1958 film you wouldn’t expect to die, though this just adds to the realism of the film

The scene that will give you chills

The ending is something that leaves you feeling, like you have watched the real plight of the people on-board the Titanic, rather than being upset that two people didn’t end up together, you are left thinking about all the people that lost their lives, but still happy for the ones that made it, unlike the Cameron film, the ending is simple, it ends with Lightoller, the surviving senior officer, reflecting that they were all so sure about the safety of the ship and that he will “never be sure again, about anything.”, followed just a poignant close up of a lifebuoy floating on the surface of the black water.

If ever you wish to watch a beautiful telling of the Titanic story and when you are trying to decide between the 1997 star maker or the 1958 film, I would suggest the beautiful tale called A Night To Remember, not only because it tells a better story but also because it was so good that it left its make on a young filmmaker who went on to make a blockbuster about a ship that sinks.

This film has the characters that will make you care about them, the scenes that add the dramatic punch and this came before a time where every film had to have a romantic subplot, its an adult film, with adult themes and hits you with an emotional punch that means that A Night To Remember is a film that is the inspirational film that you will never forget.