Alaska is a pretty inhospitable part of the world at the best of times, but for America’s most northern city, life is about to get a whole lot harder, partially down to the fact that the annual month-long polar night is only days away, plunging the few residents that stick around into 30 days without sunlight, but also because that makes the city the perfect hunting ground of a creature that can no longer venture out into the sun. Vampires. 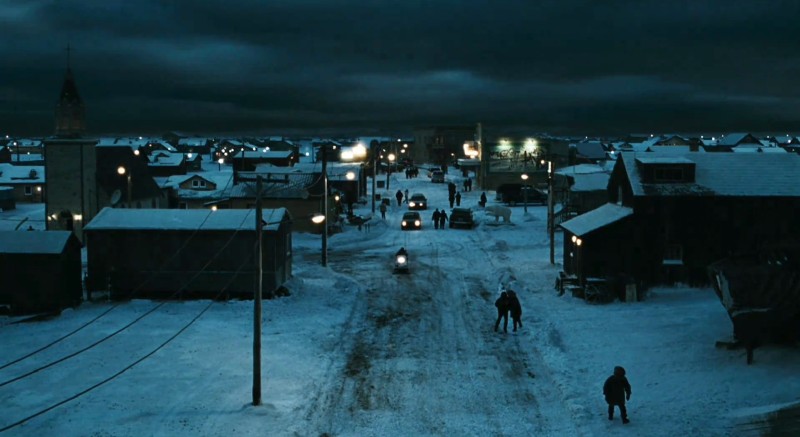 Since Twilight you are more likely to find a vampire in a romance flick than a horror movie, but every so often a genre film comes along and reminds the viewer that Vampires are to be scared of not fantasized about, 30 Days of Night is just that film.

Adapted from a graphic novel by Steve Niles’, the film moves away from vampires brooding pretty boys with grand houses and a taste for young blood, deciding to turn them into a roaming group of genuinely scary monsters that no longer have to deal with the issue of sunlight.

With the final sunset for 30 days not far off when the film starts, it doesn’t take long for the initial attack to take place, with the 600 or so people quickly reduced to a handful in a brutal and gory fashion, these vampires mean business and they are determined not to leave any witnesses, turning the second half of the film into a harrowing game of hiding and seek, with the group hoping to survive long enough for the sun to once again come up again.

There are a few flaws in the film for sure, the lack of sun makes it difficult to show the passage of time properly and there are a few more jump scares than necessary, but overall the film runs a good pace, the acting is solid throughout and there are a couple of scenes that inject much-needed emotion into what would otherwise be a pretty standard creature feature, sadly the same can’t be said for the sequel.

If you liked: The Crazies, 28 Days Later, Nosferatu, Stake Land