There’s a lot of soldiers out there and there’s only four of us.

In the hours leading up to the D-day landings a small group of paratroopers successfully survive being dropped behind enemy lines, soon discovering that it’s not just the Nazis that are standing in the way of them completing their mission, the small French village not only contains a radio transmitter but also an underground lab breeding an entirely different type of solder.

A war/horror hybrid film coming out on DVD in March with an 18 rating, it doesn’t tend to scream quality, but first impressions can be deceiving and from the first 10 minutes alone you know that the film is going to be much higher than expected, in fact the opening scene of the group parachuting into Nazi-held France was so gripping that I forgot all about the horror element to come and it wouldn’t have felt out-of-place in a straight up war epic. 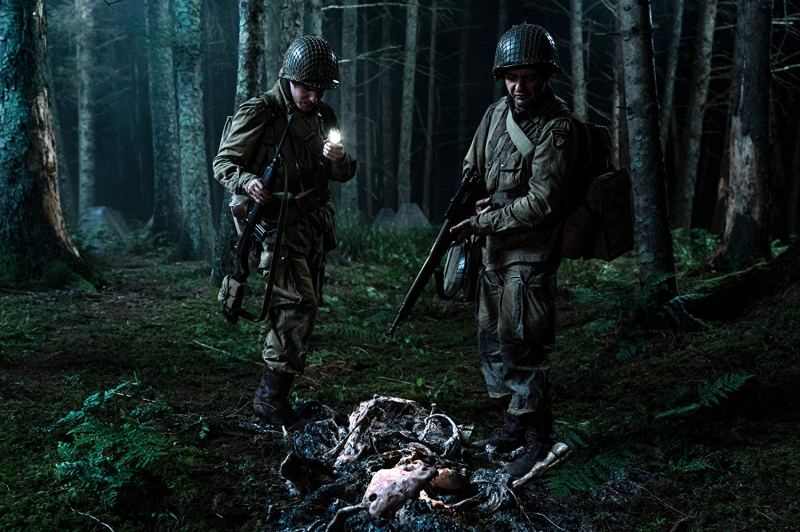 Once on the ground, the scenes of battle lend themselves perfectly to a horror film and the change of pace from war film is subtle, with the imagery slowly starting to get progressively stranger and thus before you know it you’re watching a B-movie horror film with high production quality.

Now I wouldn’t say the film ever completely embraces being a B-movie, instead the makers have produced a film that for better or worse treads a fine line between gory action horror and claustrophobic war piece, that although it does them both well, I feel the film would have been improved if they had committed to one or the other.

Another of the issues facing the film is despite the best efforts of the crew, the film does slow down once the team reach the village and although its done to provide time for some character development, all it does is highlight just how stereotypical some of the characters are, not only this but how out of character some of their actions end up being.

This, however, doesn’t make Overlord a bad film, in fact I would say it’s actually two great films working together to produce a good one that it entertaining, brutal, a little surprising and filled with some beautiful cinematography, all of which you wouldn’t have expected in a film about Nazi monsters, made all the better by the fact that the film doesn’t sequel bait.

Overlord sneaked past me when it came out in the cinemas before Christmas so imagine my annoyance when I finally got round to watching the movie and discovering just how good the film actually is and how much better it would’ve looked if I’d watched it on the big screen.