The Dolphin Hotel invites you to stay in any of its stunning rooms. Except one. 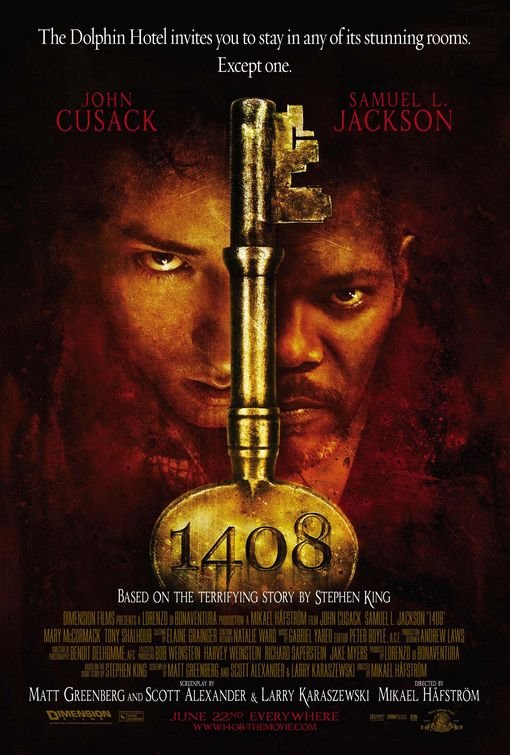 When sceptical paranormal writer Mike Enslin (Cusack) is invited to The Dolphin, a grand old hotel in the centre of New York City, he expects the tales of ghosts and deaths to be as overblown as every other location he investigates, but room 1408 isn’t like anywhere he has stayed before.

Straight off the bat, I have to say that I generally tend to enjoy horror films that take place in locations that are usually seen as safe place to be such as a large hotel in the middle of a busy city where you are only meters away from other people who could help you if anything was to happen, the inability to reach help when it is so close adds a little something to a film but only when it is done well like in Candyman  or  Midnight Meat Train. sadly however the good ones are few and far between, with plenty more bad ones coming out these days where the characters come across as stupid for not reaching help.

Because of this 1408 was always going to find it tough to produce a film that is, believable or at least entertaining and overall for the most part I would say it managed too, this is partly down to the great casting of John Cusack as Mike the down on his look paranormal writer and Samuel L Jackson as the hotel manager who tries and fails to convince Mike to not stay in the room, both of whom fully commit to their roles and fit their characters really well.

Another of the aspects of the film that made it work well is just how well the tension builds during the early part of the film, with little almost unnoticeable changes playing with both Mikes and the viewer’s minds, drawing the audience in as we try to spot just what happens next and decide if it is really a supernatural occurrence or something else entirely, making first act of the film a great psychological piece.

Sadly however the film does suffer from some issues that affect its overall enjoyment such as the massive drop in suspense in the second act of the film when the action leaves the room and although it was done for a reason you can’t help but feel it wastes all the great build-up you gained from the first act and even the big twist isn’t enough to fully make up for it.

On top of this the film makers have chosen to give Mike a rather cliche backstory that you have not only seen before in other films, but it has also been done better in the majority of them, thus slightly denting your connection to the character and stripping away some of the emotion that you as the audience are expected to feel during the final acts of the film.

Thirdly 1408 has at least four different endings that I know about at least to choose from, some of which are better than others, unfortunately for me the edition I picked up was the Directors Cut and I would argue happens to be one of the weaker endings, not bad but just not the best just like the film as a whole.

To sum up, I would say that 1408 is a good film with an excellent cast but has a few downfalls that stop it from being anything more than a forgettable psychological horror film, I would say £1 is about right in terms of what you would expect to pay.

If you liked: Sinister, Candyman, The Shining