The mission is a man

Following on from the D-Day landings, a small group of soldiers led by Captain Miller (Hanks) are dispatched to go behind enemy lines to rescue Private Ryan (Damon), the last remaining sibling after three of his brothers are killed in action.

Today marks the 75th anniversary of D-day, in which over 4000 allied soldiers died attempting to capture the Normandy beaches from the Germans and start the long process of retaking Europe, prompting me to take a look at Saving Private Ryan, Steven Spielberg’s multi-oscar winning masterpiece that still to this day is considered one of the best WWII movies ever made.

Saving Private Ryan doesn’t hold back on the brutal nature of war, with the exception of a small scene set in modern times (something that was all the craze at the time), Spielberg made the choice much like Christoper Nolan did when making Dunkirk to catapult the audience straight into the brutal and gory assault on the beaches of France and doesn’t let up until the end of the film when you are transported back to the modern day.

Spielberg’s excellent use of shaky cam and eye for detail combined with excellent acting by Hanks and the rest of the cast keeps you glued to the screen for the entire sequence, with the soldiers experiencing practically every emotion along the way in raw and savage detail and as their brothers in arms are maimed and die all around them you can’t help but become endeared to them, this despite there being no real dialogue or character development until after the battle is over.

Once off the beaches, you are finally given the chance to meet the squad of men that you’ll be spending the rest of the film with as they make their way across the war-torn French countryside in search of Private Ryan, with each member displaying differences of opinion about the mission and the war in general, leading to some interesting scenes in between the fighting and doesn’t feel as cliche as with other war movies, whilst giving us some great character development.

It is once the film slows down that Spielberg’s eye for detail and directing style come into their own, taking film from claustrophobic street fighting to open battles in fields and back again, as the squad make their way towards their overall goal, he manages to keep the story moving along at a brisk pace despite the films long runtime.

The film finishes off with a large set-piece battle to protect a bridge and it is here that the characters that you have grown fond off come into their own for better or worse, especially that of Corporal Timothy Upham (Davies), the interpreter who is so paralyzed by fear that he is unable to help while a couple of his brothers in arms are killed, showcasing perfectly that the brutality of war can affect people differently and showcases the loss of innocence, with him starting off as the compassionate voice of the group and at the end succumbing to the corrupting nature of war. 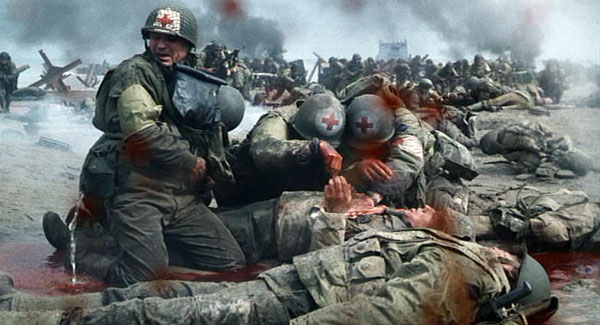 Tom Hanks also shines as Captain Miller, the assertive and well-liked leader of the squad who uses his past as a school teacher to handle his men and get them to follow him even when they believe he is making the wrong decision, his portrayal shows that Miller isn’t perfect, he makes some mistakes and has to live with the deaths of the men under his command, trying to justify it by believing that for every man he has lost he has saved more in the process, all of which is showcased perfectly by his choice to attack a machinegun nest rather than going around it, putting his own men in danger rather than risking the nest attacking the next squad and causing further loss of life.

The only real issues I found with the film is the almost studio set nature of the surroundings, with no civilians to be seen apart from one family during the entire runtime, this despite the fact that the squad visit at least three different towns/villages and roam countryside for hours, it would have made the film a lot more interesting a realistic if they had to deal with the prospect of civilians as well as enemy combatants on more than one occasion.

Saving Private Ryan remains one of the best and most realistic war films ever made and gives us just a little glimpse of what those brave men went through 75 years ago and although we will never fully experience what they went through, this film with its excellent acting, visuals, directing and editing will certainly mean that we don’t forget.