This summer expect the unexpected 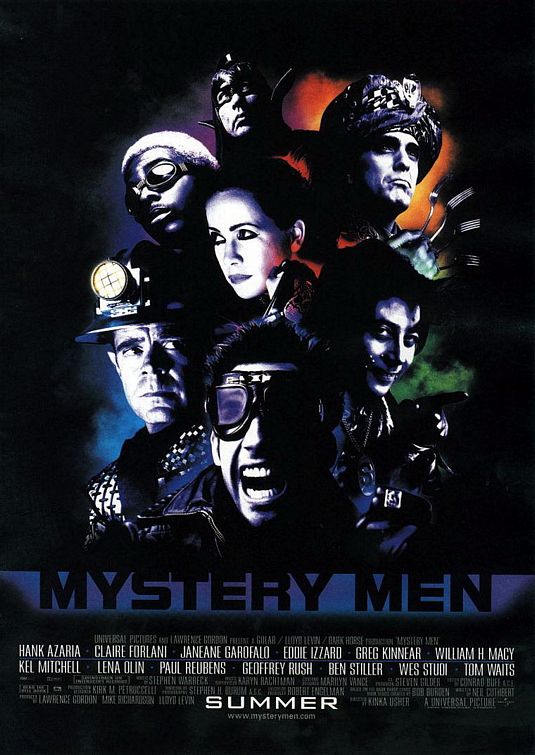 Bored of fighting second-rate villains, Champion City’s main superhero arranges the release of criminal mastermind Casanova Frankenstein, only to end up being captured by him leaving the fate of the city in the hands of seven inept wannabe heroes.

Years before The Avengers and Justice League brought together a collection of superheroes together to fight a common foe, Ben Stiller was heading up his own group of heroes in the Mystery Men, a film that contains some of the worst traits of both its successors but also boasts some aspects that mean it shouldn’t be forgotten about forever.

When Mystery Men came out it was seen by many as a risk due to how the last big-budget superhero film had performed, which was, of course, Joel Schumacher’s Batman and Robin, a film that not only did badly at the box office but also was pretty much universally panned by the critics, but in a way this loose adaptation of the Flaming Carrot Comics might just have been the film the genre needed to prove that it wasn’t dead and not long after we got X-Men, Spider-Man and Unbreakable to firmly put it back on track.

Starting off with the film’s shortcomings, of which there are many, but the biggest of which being just how close to Batman & Robin it is in both look & feels and although there is a spoof element there, sometimes it feels as though the two films could be from the same cinematic universe.

The next biggest issue I found with the film is just how long it goes on for, its two-hour runtime tends to drag on and ends up feeling bloated with too many jokes missing the mark, multiple missed opportunities to provide interesting/worthwhile character arcs and too much time devoted to making interesting visuals rather than developing the characters, especially the antagonists, which I guess is something the film has in common with the vast majority of superhero movies we get these days.

This isn’t to say that the film doesn’t have some redeeming features, the first being Janeane Garofalo’s character The Bowler, who unlike the majority of females in superhero movies, including female heroes, she doesn’t need to be rescued by her male counterparts at any point, has the most satisfying of the character arcs and in the end she is the one that makes the mission a success, all of which is done in a way that feels natural and isn’t forced upon the audience in a ham-fisted way it was done in Avengers: Endgame or Captain Marvel.

Another aspect of the film that I found enjoyable is the performance of Hank Azaria, who plays Jeff/The Blue Raja, an American that puts on a Britsh accent and throws forks at criminals, providing a lot of the non-fart related comic relief and was given enough character development to make you warm to him, something that may or may not of been helped by the fact I’ve recently been binging his latest TV outing Brockmire.

Mystery Men is a film that came at a strange time in the genre’s history and boasts some really good aspects, sadly it also contains limitations that make it difficult to fully enjoy thoroughly and in my opinion £1 is about right.