Beyond the horizon lies a secret to a new beginning 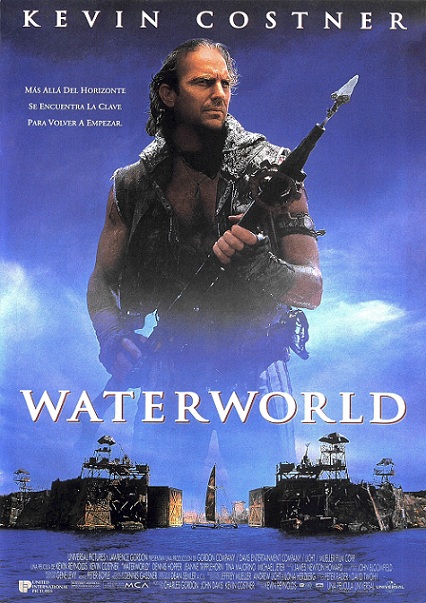 In a future where the polar ice-caps have melted and the earth is now almost entirely underwater, mild-mannered ocean voyager Mariner (Costner) reluctantly agrees to help a woman and child escape the clutches of a gang of pirates known as the Smokers lead by the evil Deacon (Hopper).

Waterworld, when it was released, was famously one of the most expensive films ever made, was plagued with issues during production, did disappointingly at the box office and only making a profit once home media sales were accounted for, but this doesn’t always mean that the film is a bad one, many good films have only found success years after they were released, so with this in mind I’ve decided to revisit the film for the first time in a couple of years and decide for myself if the film is deserving of a second chance.

When it comes to Waterworld, you don’t get a complicated story with loads of sub-plots to worry about, it’s a world that is underwater, most people live on boats or floating towns and there is a group of pirates hunting for a little girl who may or may not know the way to one of the last remaining pieces of dry land, this actually works in the movie’s favour as it keeps it streamlined, while the fun, exciting and well-choreographed action sequences action scenes stop the audience getting bored.

Clearly taking inspiration from George Miller’s Mad Max movies, one of the things I loved most about the film is how good the film still looks, partly helped by the fact the filmmakers chose to avoid overusing CGI, instead, they went for a majority of practical effects and a Michael Bay level of explosions, but also due to the imaginative set designs you see throughout and some pretty awesome looking vehicles, especially the Exxon Valdez, a former oil tanker that had been converted into the base of ‘the steamers’.

Coming two years before The Postman also did badly at the box office, Waterworld clearly marked the start of Costner’s reducing pulling power at the box office, although nowhere near as good as in Robin Hood, he still channels his inner Mel Gibson for this role and does a good job despite not having a lot in the way of dialogue, but by far the best performance comes from Dennis Hopper, who clearly enjoyed himself as the campy and joyfully evil Deacon, after all, they do say it’s more fun to play the antagonist.

Sadly however the film does suffer from some pretty big issues that help me to understand why it was slated so badly by the critics and performed badly when it came out,  with the main issues being that once you get past Costner and Hopper characters, the rest of the cast is pretty forgettable, not helped by the fact that there is next to no character development throughout the entire film, or any real character arcs to speak off.

Another of the issues that I found with the film is the representation of the female characters, Jeanne Tripplehorn especially is reduced to standing around and looking pretty for most of the runtime, while Tina Majorino’s character Enola really starts getting annoying by the end of the film, it would have been nice to have had at least one capable female character that didn’t need rescuing every ten minutes or so.

Waterworld is an enjoyable popcorn action film packed with strong practical effects and an easy to follow plotline, but sadly is very of its time in terms of female representation and character development, overall it’s not going to win any awards but if you want a solid action film set in a post-apocalyptic world that isn’t Mad Max then this should be your next best option.