They will never ever be afraid. 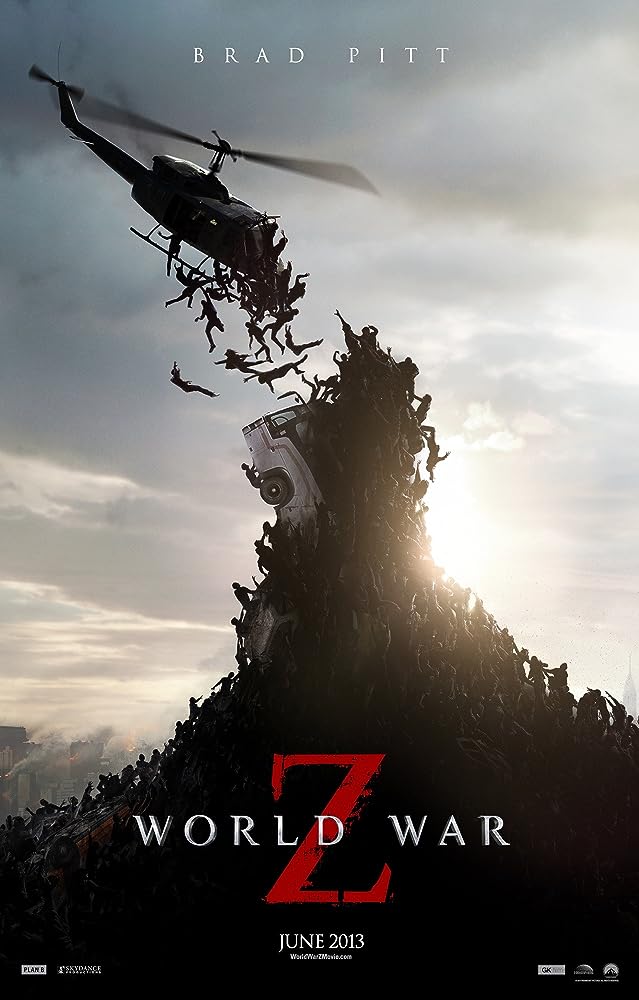 Plot: Former United Nations employee Gerry Lane (Pitt) traverses the world in a race against time to stop the Zombie pandemic that is toppling armies and governments and threatening to destroy humanity itself.

It was towards the end of the ’00s when zombies took over from vampires as the creature of choice in most big-budget horror films and TV shows, with the majority set in the back roads of rural America or in a claustrophobic location such as an apartment building or airport, that is until World War Z came out.

Although not doing anything particularly unique in term of how the zombies look, act or spread, As Gary Lane and his family travel the world attempting to stay alive, the film takes the zombie apocalypse global, not only showed the audience the truly mammoth task facing humanity but also how different countries handled the crisis in different ways with different outcomes, with one of the most surprising elements being the portrayal of Israel in a good light, welcoming refugees and willing to help the needy.

I haven’t read the book, so can’t make any judgements in terms of if it was faithful or not, but what I can say is despite all the beautiful locations and great set pieces, the film remains quite linear and centred on Brad Pitt’s character for pretty much the entire runtime and although he does a good job, it’s a shame that the film doesn’t choose to expand on some of the other characters stories.

What is also clear to see is that World War Z ran into issues, with most of the film being filled with CGI action sequences and raging hordes of zombies, whereas the final 20 minutes was closer to the kind of zombie horror films we are used to, with the majority taking place inside the corridors of a medical centre, almost as if it belonged in a different film.

Despite the issues, World War Z still remains a solid summer blockbuster take on the genre, with Brad Pitt a convincing family man attempting everything in his power to keep his family safe, while the plot keeps moving at a fast pace, with just enough tension and  scares dotted throughout to remind the audience that this is in part a horror film and not just a globe-trotting action romp, its a shame that the sequel is now as dead as the zombies.

If you liked: 28 Days Later, The Mummy, Train to Busan