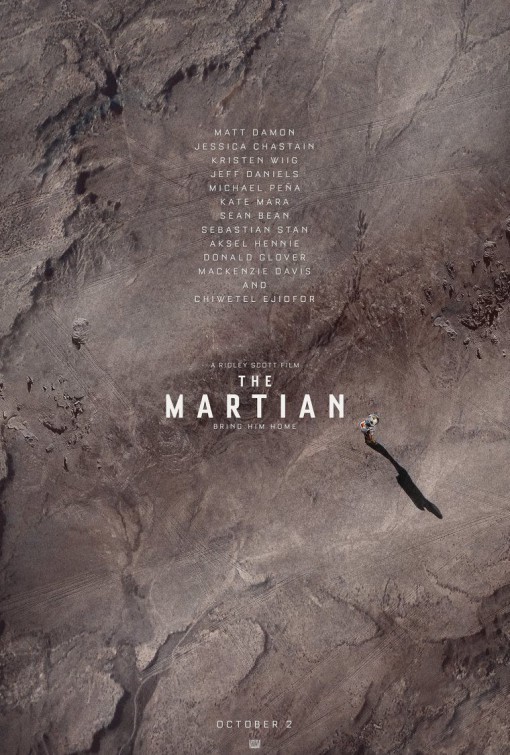 Plot: Astronaut Mark Watney (Damon) becomes stranded on Mars after his team assume him dead, and must rely on his ingenuity to find a way to signal to Earth that he is alive.

As charismatic as Matt Damon can be, I was a little hesitant that two hours of him alone wandering around Mars would necessarily result in a good movie, luckily however, my worries were unfounded and what I treated too was a collection of beautiful visuals, a great plot, Damon bringing his a-game supported by a strong supporting cast.

No stranger to big-budget sci-fi films, for some reason directors want to put Damon alone on a distant planet, thankfully this time he gets to keep his comic timing and unlike in Interstellar, his character is likeable and you find yourself rooting him in the same way you root for Ryan Renolds character in Buried.

Scott is known for making beautiful big-budget films and The Martian is no different, every shot is truly cinematic and really brings the red planet to life, while the ships and buildings all look realistic enough that you find them believable, think Gravity rather than Star Wars.

The supporting cast does a great job, with Bean, Chastain and Chiwetel Ejiofor all putting in solid performances and providing enough a refreshing break from what Mark Watney is getting up to, while Donald Glover shows glimpses of what has made him one of the most talented young actors currently working today.

Surprisingly for a long film with mostly one person one actor on screen for the runtime, the film avoids falling into a rut or becoming boring, you’re glued to the screen as the characters have to deal with interesting and complicated issues throughout.

The only issue I found with the film and this is true of most films set in space is that the director has found it hard to properly portray the passage of time and the length of time it takes to travel between the two planets and just how long Watney stranded for, maybe a little more time dedicated the rest of his crew as they travel to and from Mars would have helped.

If you liked: Interstellar, Gravity, Ghosts of Mars