Plot: Bill (Paxton) and Jo Harding (Hunt), advanced storm chasers on the brink of divorce, must join together to create an advanced weather alert system by putting themselves in the cross-hairs of extremely violent tornadoes.

The ’80s might well be the golden era for action movies, but the ’90s weren’t too far behind with even the bellow average releases and b-movies being more entertaining, unique and lasting longer in the memory than anything we are treated to today, with the possible exception of Mad Max: Fury Road.

Twister is one of these films that although not a classic by any stretch of the imagination, is entertaining and even after all these years provides the audience with re-watchability, helped by a fast-moving plot, CGI and practical effects that still hold up and good performances by both Paxton and Hunt.

Another of the films strong points is the films stong and simple identity, there aren’t multiple subplots to worry about and keep going at a brisk pace, just what you want from a popcorn movie to zone out too, these days directors seem obligated to complicate their films and overexplain the motives.

That being said, Twister does have some issues, which is probably why it’s not as fondly remembered as other disaster movies of its time such as Volcano or Dantes Peak, such as the use of Jami Gertz character Dr Melissa Reeves, who is used throughout as a stand-in for the audience while the storm chasers talk science, before she is un-ceremonially left at the side of the road and forgotten about once her use is fulfilled.

On top of this, although a rather simple plot revolving around trying to release trackers into a hurricane, the makers felt the need to introduce a rival group of storm chasers, which isn’t the bad point, it’s the fact that they felt the need to make their leader Jonas (Elwes) such a pantomime villain that he feels almost out of place. 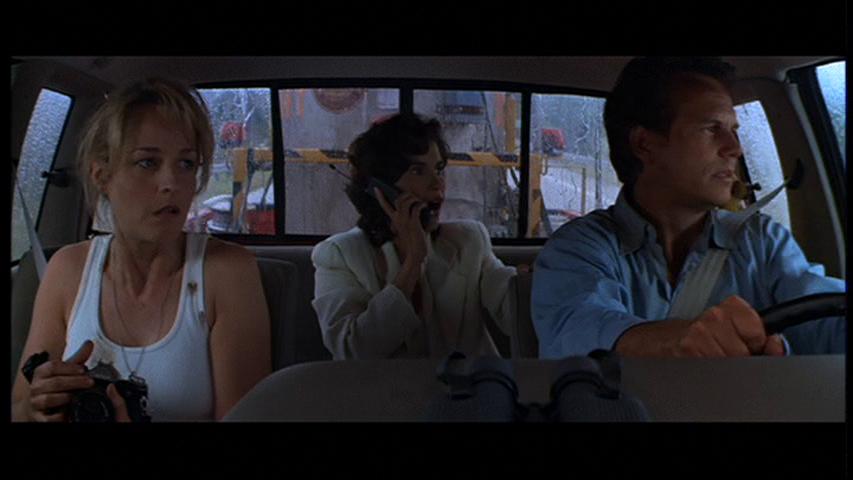 My only other gripe about the film is a backstory involving Hunts character Jo Harding, with film opening with the death of her father and apart from a couple of throwaway lines, later on, the emotional impact of the loss is never really utilized enough to make it worthwhile, it could have quite easily been an unconnected family without it affecting the plot in any major way.

But due to the films overall simple nature and great visual effects, you can forgive a few minor issues with character development, with Twister remaining one of the ultimate summer blockbusters, which begs the question when cinema has moved on from superhero movies and we go through another craze of disaster films, will we see another film about the deadly nature of hurricanes?

If you liked: Speed, Dantes Peak, The Towering Inferno