1964 When America was at war with itself

Plot: Two F.B.I. Agents, with wildly different styles, arrive in Mississippi to investigate the disappearance of some civil rights activists.

Alan Parker’s Mississippi Burning is a fictionalized dramatization of the real-life investigation by the FBI into the disappearance and murder of three civil rights protestors in rural Mississippi.

One of the first things you notice about the film is the that it’s one of division, not only between the White and Black communities or the North against the south but even between the young procedure-oriented Ward (Dafoe) and the less direct, but wiser and subtler Anderson (Hackman). A Southerner himself and former sheriff, he sets about to charm his way to the truth, unlike Ward who floods the town with agents and causes more divisions.

Mississippi Burning might well be one of the best historical dramas of the ’80s, with Parker delivering a strangely humanistic message, which is just as important today as it was back then, reminding us to stamp out bigotry and hatred whenever it’s encountered and in the case of Mayor Tilman (R. Lee Ermey) all it takes for evil to triumph is for good men to do nothing, not that I believe Tilman was particularly a good man. 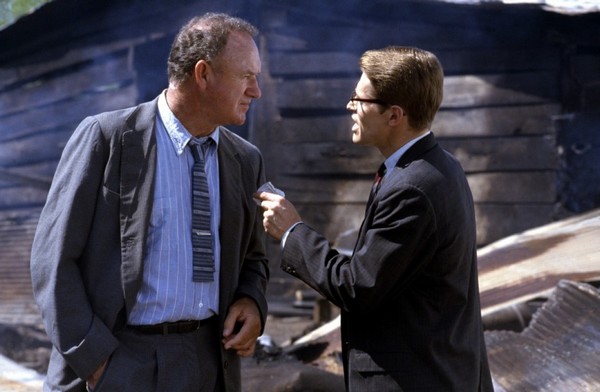 One of the most touching characters is that of Mrs Pell, (McDormand) although sweet and carling, she’s caught between her love of her police officer husband Deputy Pell (Dourif) and her desire to tell Anderson the information he needs to take the Deputy down.

Another of the characters that stole every scene they appeared was that of Aaron Williams (Darius McCrary) the young black son of a preacher, who is one of the few people prepared to stand up against the almost insurmountable hatred and evil facing their community.

I have watched films that made me sad or angry, but this film makes me want to jump back in time and try to do something to stop this, showing us how terrible and toxic racism is and in order for the film to work, the characters all had to commit to their roles in their entirety, Dourif especially can play evil exceptionally well.

Hackman is brilliant. He gives the performance of a lifetime and it is his anger that gives him his edge. He sees things differently than Ward, causing them to bump heads when it comes to the grey areas they needed to go into to catch the perpetrators.

Dafoe is great as well, it’s nice to see him play a good guy for once, these days he only seems to pop up on the other side of the law, while the supporting cast is also excellent, with each character fleshed out and richly portrayed.

Mississippi Burning has become one of my favourite movies, not only because of it’s great acting and story but also because of the timeless message, and if you haven’t seen it you should make time to do so, even if it is just for the scene between Anderson and Deputy Pell at the barbershop.

If you liked: A Time To Kill, Schindler’s List, Blackkklansman