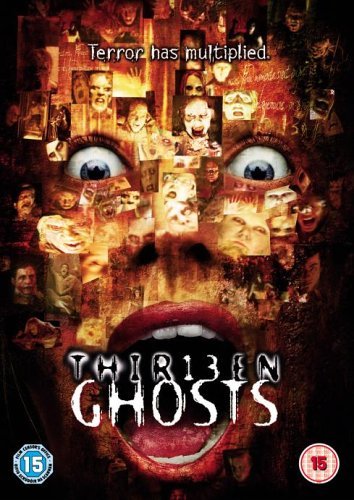 Plot: When Cyrus Kriticos, a very rich collector of unique things dies, he leaves it all to his nephew and his family. All including his house, his fortune, and his malicious collection of ghosts!

Earlier this week when I wrote about Scary Stories to Tell in the Dark that it reminded me of the horror films that I watched in my teens such as Darkness Falls and Thir13en Ghosts, which prompted me to revisit the latter and see it still hold up or whether I’m looking at it through rose coloured glasses,  turns out I’m still in luck it remains as enjoyable as ever.

First of all, there something about horror cinema from the mid-’00s when filmmakers put so much effort into creating great set design, with this film no different, starting with the junkyard at the beginning being used to great effect, with some of the most enjoyable and fun ghost murders I’ve ever seen.

Next, you have the house with glass walls and floors, it’s not your normal haunted house and really helps make the scenes filmed there feel more like the characters are stuck in a maze than somewhere people live.

It would be wrong to say that the film is overly clever,  but in a film like this, it’s almost not really the point, instead, you are supposed to watch some gruesome deaths, enjoy some jump scares and laugh at some of the cheeser parts (and there are many).

The plot is near-ridiculous and shares nothing with the film it shares a name with, apart from needing special glasses to see the ghosts, But, again when it comes to popcorn horror films you don’t go think, you go to be scared, think more Sinister than Hereditary.

Despite being nearly 20 years old, the visual special effects are still great, especially the makeup effects of the ghosts. The editing, on the other hand, is very of its time, with lots of jump cuts effects, reminding me a little of the old anti-piracy advert that was shown before DVD’s, though there was one panning shot in the families apartment, explaining the loss of their mother than I found hugely enjoyable.

The only real downside was that given all the time the filmmakers spent creating imaginary character design, we could have done with a bit more time devoted to the background of the ghosts, maybe them being captured along with some backstory like with the Jugganort.

If you liked: 1408, Overlord, The Legend of Hell House