The search for our beginning could lead to our end

Plot: Following clues to the origin of mankind, a team finds a structure on a distant moon, but they soon realize they are not alone.

Although some of the later Alien sequels were nowhere near the excellence of the original movie, I was still excited when it was announced that Scott was returning to make a series of prequel films leading up to the events in one of my favourite sci-fi horror movies of all time, even more so when seeing the great cast they had lined up to launch the new trilogy.

Unlike the other films in the Alien universe, Scott chose to avoid making yet another creature feature in space, instead, he made a film that asks bigger questions about the purpose of life and humans desire to meet their makers. This is Scott paying homage to his previous work while expanding the lore he helped create. (at this point we all need to pretend the AVP films never happened).

The Prometheus (the ship) expedition is essentially launched because of scientists Elizabeth Shaw (Rapace) and Charlie Holloway (Logan Marshall-Green) have discovered ancient drawings in a Scottish Cave from an ancient civilization that has similarities to ones from all over the world,  leading them to believe a race of Aliens were responsible for life on Earth or at least interacted with early man, leading to Dying billionaire Peter Weyland (Pearce) choosing to fund their quest in hopes of solving one the biggest questions known to mankind, what is the meaning of life?.

Unlike the Nostromo, the Prometheus has a much larger crew, with so many unique characters to focus on, In addition to Shaw and Holloway, we have the ship’s captain (Elba), the usual robot David (Fassbender) and overseer of the mission. Meredith Vickers (Theron), all of which are played to perfection while the rest of the crew are likeable and given the right amount of screentime to make you care when the proverbial shit hits the fan as they explore the pyramid-like structure discovered on this new planet. (For anyone that’s seen an Alien film before, you know what’s going to happen)

Given the immense scope and scale of Prometheus, it’s safe to say that the film is more of a science-fiction than horror and I found myself thinking how hard it’s going to be to link this film to the much more Clautarphobic feeling Alien, even if they have another two films after this to do it, that is until the final act that Shaw truly emerges as the main character we want to root for in the same way Ripley did in its predecessor and putting all the male characters to shame in the process. 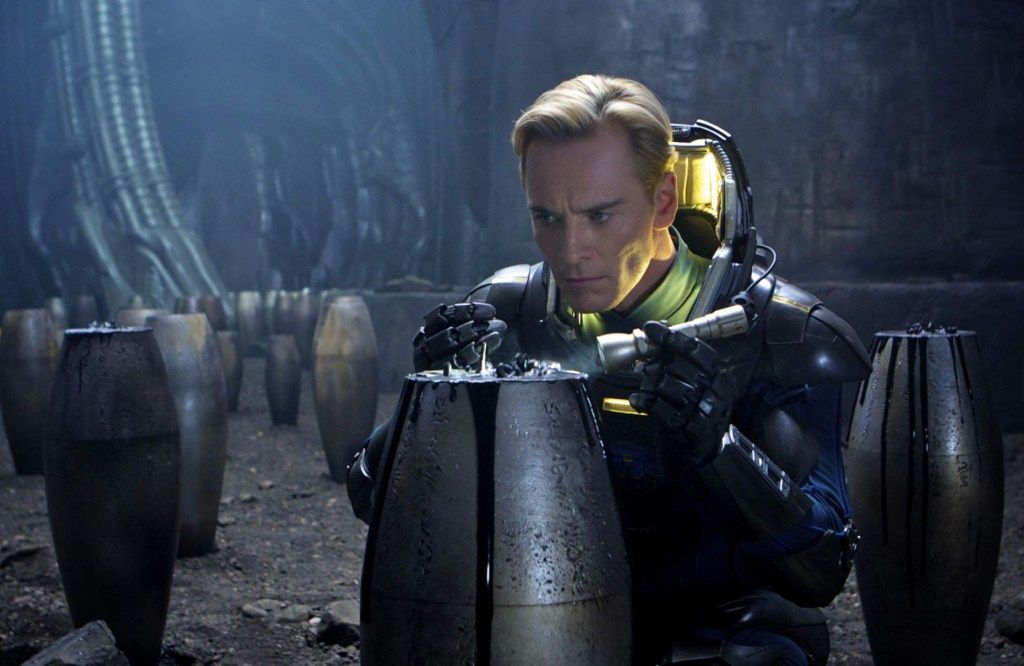 Well apart from Fassbender’s David who from start to finish not only steals every scene he is in but also is the most fascinating character, his almost childlike nature and quest for the same knowledge as his human counterparts is muddied by his obvious. Not only does this make him strangely one of the most human characters, but also leads to some great exchanges between him and the rest of the characters, after all, he has already met his makers.

Another of the highlights of the film is the excellent visuals, even the barren plains and mountains of the alien planet are made to look stunning and then there is the Prometheus itself. Far from the cramped, darkened corridors and ducts of the Nostromo, this time interiors are spacious, high tech and much like the overall theme of the film feels more at home in high science fiction than the horror that the series eventually becomes.

Depending on how you look at it, this might be the biggest issue with the movie or a refreshing change to a tired format and I believe this all depends on if you went into the film expecting it to be more horror or science fiction, either way, I would argue that Prometheus is an extremely well-done movie that is strong enough to stand alone, but is aided by it’s connection to the expanding on the 1979 classic.

If you liked: Event Horizon, Alien, The Thing