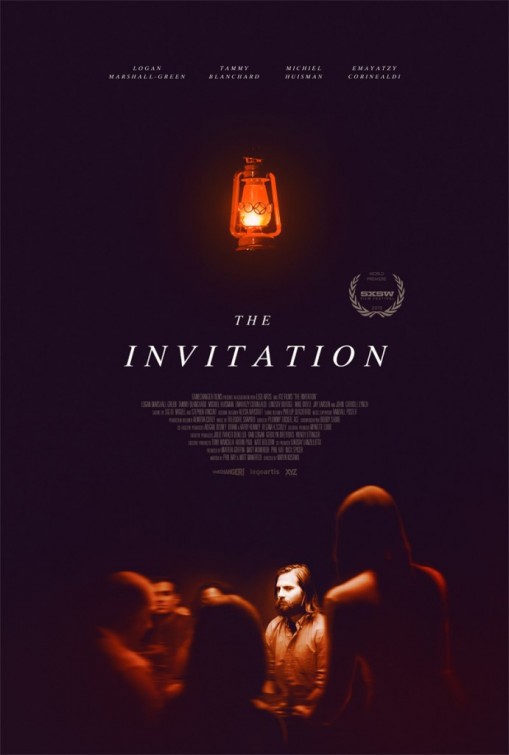 Plot: A man accepts an invitation to a dinner party hosted by his ex-wife, an unsettling affair that reopens old wounds and creates new tensions.

When it comes to The Invitation, it’s difficult to assign it to just one genre, is it a drama? is it a psychological thriller?, does it have touches of a horror film?, I would argue yes to all of the above and even throw some mystery into the mix for good measure, all of which makes this film on of my favourite recent horror/thrillers and one that works on a multitude of different levels.

Karyn Kusama creates very effectively a wonderfully claustrophobic atmosphere inside the house in which the dinner party is taking place. conjuring up a location where paranoia can bloom. Shown pretty much from the point of view of Will, the film, the editing and the transition from one scene to scene are intentionally abrupt, making you doubt if he is a reliable narrator or is his paranoia getting the better of him in this obviously stressful situation.

I love the way the film is shot, with a rich visual colour texture, shifting from the orange-scenes in the party to a blue of the flashback scenes, elevating the relatively simple camera work. From artistic sense, it makes the film more interesting and when the more complicated shots appear later on in the film it comes out of left field and turns things up a notch.

When it comes to the acting, everyone does a great job with what they are given, but it’s Logan Marshall-Green and Tammy Blanchard who steal the show and packing in the emotion. Green is extremely charismatic throughout whilst remaining stoic for most of the first act before his genuine vulnerability caused by his inner turmoil and guilt becomes too much. Blanchard, on the other hand, is the perfect Hitchcockian mystery woman, with subtle hints throughout hinting at her inner darkness hiding just underneath the smile.

‘The Invitation’ is a brilliantly acting and directed suspenseful thriller that explores both grief and the lengths in which people will go through to avoid having to face their sadness, whilst at the same time warning against people that will use your grief for their own gains.