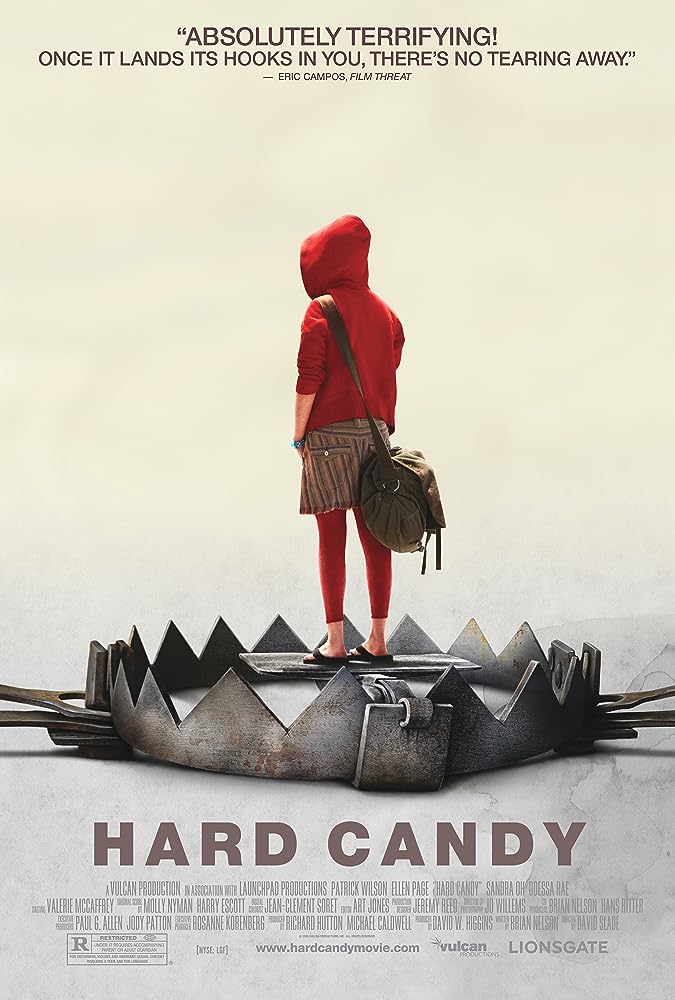 Plot: A teenage girl raids a man’s home in order to expose him under suspicion that he is a paedophile.

This week I found myself reevaluating a film that on first viewing didn’t think much of but second time round I have to admit that I had judged it too harshly and this brutal revenge is proof that when you have a great film-maker and strong acting, you don’t need a big budget to make a good film.

Hard Candy is essentially a single location film with two actors, but that doesn’t stop it from being both tense and hard-hitting, which is all the more impressive as it was the debut feature film from director David Slade. The plot is quite simple, a young girl turns entraps and turns the tables on a suspected sexual predator, nonetheless, it manages to remain gripping throughout, helped not only by good directing but also a terrific pair of central performances from Wilson and Page.

To start with, Ellen Page as Hayley is phenomenal, even then you could tell that she would be going on to bigger things, with her performance good enough to make her character’s transformation from an adorable young girl into an avenging angel feel completely plausible and somewhat realistic, even with the fantastic lines that the character is given, it’s Page that makes the role her own, a young girl wise beyond her years, filled with cynicism and hints of possible insanity.

Opposite Page was the equally great Patrick Wilson, who feels like the perfect choice for the role of Jeff, a photographer who makes a living capturing young models and possibly takes advantage of them at the same time. Wilsons’s clean-cut good looks and charm makes you doubt if he is a paedophile and that is what makes it all the more realistic. He’s not some od ugly man hidden away but someone that can hide in plain sight and we’d have a hard time believing could be such a monster.

Filled with torture and revenge, Hard Candy shares a lot of the same themes as both Saw and Hostel. but there those films favour gore and violence, this one is more for the thinking man and prefers for focus on the character and psychological trauma, similar in a way to Knock Knock but done much better.

No mistake about it, Hard Candy is a daring film to make, in which we see a 13-year-old girl, drug and torture a 33-year-old suspected paedophile for an hour and a half. This isn’t a happy film but one that nonetheless glues you to the screen and forces you to think about what people might be hiding behind a smile and easy nature.

If you liked: Megan is Missing, Amber Alert, Prisoners