The Blood War is On 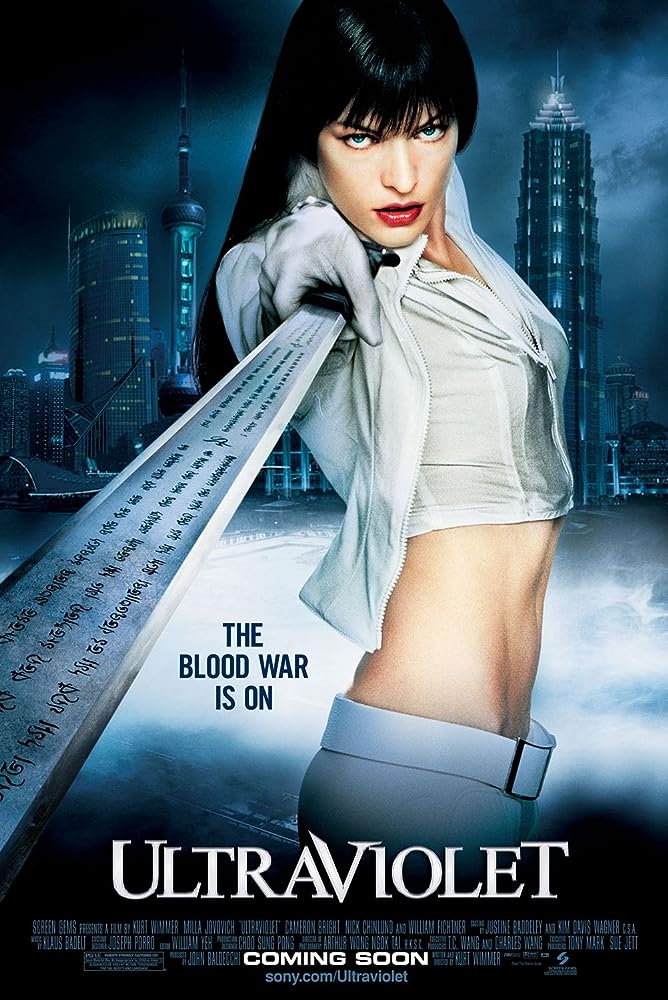 Plot: A beautiful hæmophage infected with a virus that gives her superhuman powers has to protect a boy in a futuristic world, who is thought to be carrying antigens that would destroy all hæmophages.

If you read my reviews you’ll notice that no matter the film, I can normally find some good aspects, but after re-watching Ultraviolet, I really am struggling to find any good things to say about this movie. It really is that bad and I’m terribly disappointed with Wimmer, who gave us the cult film Equilibrium just four years prior.

Ultraviolet attempts to rip-off the successful points of any number of science-fiction films that have come before it, namely The Matrix, Blade and Underworld, only for it to fail miserably in all respects. Yes, some could say it was down to Sony tampering with the film, cutting the budget and removing so many vital plot points. But even with what’s left, I cannot figure out how the film would have been better even if the film had been left alone.

The plot incomprehensible mess, which would take too much time to try and explain. In a nutshell, Milla Jovovich is Violet, a member of a vampiric race that’s near extinction. She goes on a mission to intercept a weapon that could kill off the last of her kind but is told not to open it. For some reason, she does and discovers that the package is a human boy named Six (Bright). As everyone she meets seems to want him dead, she takes it upon herself to protect him and find out what make him so important.

Original? No. Every aspect of this film has been done before and done much better. The worst part is that everyone involved seemingly knows it and they are just there for a paycheque, hoping to deliver something that does not completely suck. Well, mission failed!

Jovovich for one reason or another is just kills everything in sight without batting an eye and much the same as Captain Marvel, can’t be hurt. meaning at no point during the film do you feel worried for her or the boy, the whole film feels like a video game on the easiest setting.

The next problem you come across is that film does not make any sense, mainly due to a bad script and editors taking out more than a handful of vital plot points, removing character development and information vital to the plot. The audience only can grasp at the ongoing relationships that the characters have, Never knowing the specifics.

The characters just kind of go place-to-place, and it is assumed that we will know why or forget that there is little to no mention of what anyone is doing or why. Seemingly the director hoped Jovovich is kicking ass every five minutes for no reason will make up for no cohesive storyline to follow.

On top of a bad story, the acting and dialogue are wooden throughout. The few lines within the film feel stunted and too short, doing nearly nothing to move the plot along. No one seems unenthused their lines, even Jovovich has a total lack of any charisma. This film does nothing to make me believe she is a talented actress.

Bright is not all that much better. He has a whole total of three minutes of dialogue in the film (but plenty of screen time), and it is all delivered with the intensity of a gargoyle statue. It is so bland and so wooden that you begin to wonder why they even bothered to cast anyone in this role in the first place. Nick Chunland and William Fichtner are not all that much better, but at least the majority of their acting is delivered with some sort of inclination of attempting to act. Sorry to say, they do not appear all that much in the film.

The visuals might actually be the worst part of the film. Yes, they are vibrant, but the CGI looks very cheap and remind me of late ’90s music videos, while some of the costumes and sets are downright ridiculous-looking. You would be forgiven for thinking that the whole production was a made for TV movie or a cut scene from GTA, rather than something the studio expected you to go to the cinema to see. I dread to think how bad the film looked on the big screen.

I have nothing good to say about this film, even the 50p I picked it up for on Blu-Ray is seeming a little steep, If ever you think about watching this film. Don’t

If you liked: Hellboy, Gods of Egypt, Independence Day: Resurgence